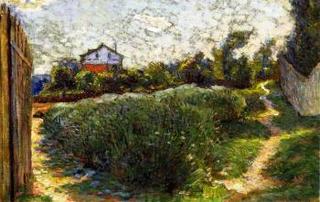 As I said in my previous post, Marie Bracquemond’s husband, Félix, hurt as well as helped her artistically. Although they both exhibited at one or more of the eight Impressionist shows, she was, in fact, more receptive to the new esthetic than he was; and his criticisms could be choleric. He also moved the family to the suburbs and cut her off from attendance at galleries or museums, e.g., the Louvre (where they had met as copyists!).

Her picture of what appears to be a back yard interests me both for what it shows and its technique. Many bourgeois women of the period, trapped by domesticity, chose gardens as a motif: at least they were outside the house and could lead thoughts into nature. Here Marie has chosen an unkempt scene; its paths beckon to a distant landscape, though the one on the right grows small while the viewer is held back physically. It seems to me to portray a secret wish to go exploring.

It also looks to me as though the canvas has been allowed to show through in places. In contrast to the smooth “licked” surface valued by Academic painters, this acknowledges the physicality of the support and also uses impasto to suggest the texture and solidity of what is depicted. A painting is basically two-dimensional but it speaks of three dimensions to our minds. Similarly, writing is made up a series of letters, symbols, across a page; yet if we are going to call up fully experienced worlds, we do well to find vocabulary to suggest what textures are encountered by our characters—and send our readers out exploring. An increased awareness of touch seems vital in a world that is becoming too limited by what the digital screen can present. Here I am blogging on-line; but what I say next is, Get outside, people!