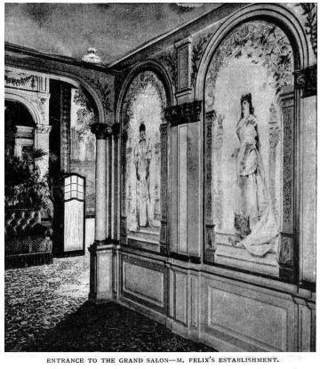 What fun! An article, Paris Dressmakers, in the December 1894 issue of Strand Magazine reports on the fashion salon of the couturier known as M. Félix: “A gallery leading from the first salon to a second has four large panels, painted by Louise Abbéma, representing Sarah Bernhardt in ‘Ruy Blas,’ Croizette in the ‘Caprices of Marianne,’ Ada Rehan in the ‘School for Scandal,’ and a fancy costume of the period of Louis XV.”

I can't be sure that the panels in this illustration from the magazine are the ones by Louise Abbéma, but I think so. And what a way to tie together women artists, fashion, and two actresses (Bernhardt and Croizette) who appear in Where the Light Falls—a kind of after-the-fact research rapture!

I found mention of the Strand article in the 2016 catalogue for Degas, Impressionism, and the Paris Millinery Trade, which is currently on sale for a reduced price here.