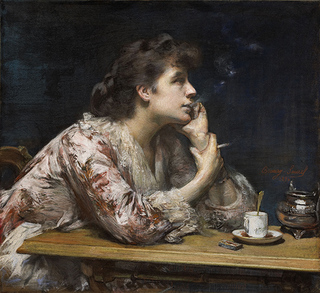 In the latter 19th C, polite society considered it a sign of shocking Bohemianism for women to smoke. Now we might not worry about the sitter’s morals, only her health. When Amélie Beaury-Saurel painted this picture, however, she probably meant it as a realistic depiction of an emancipated woman at home in a private moment of quiet reverie—hair down, loose morning gown, coffee cup on the table, the relaxation of a cigarette. Some have even guessed that it might be a self-portrait.

Beaury-Saurel was a student at the Académie Julian in the 1870’s. She married its founder, Rodolphe Julian, in 1895 and directed the school from his death in 1907 until her own death in 1924. I did not use her at all in Where the Light Falls—there was more than enough other colorful material available (and I could give the cigarette to an artist’s model!)—but there is probably a great story about her just waiting to be told.

This week, I went up to the Clark Art Institute to revisit Women Artists in Paris, 1850–1900 and was struck again by this painting, which I saw for the first time here. The exhibition has some iconic works and many, like this, that are less familiar You still have a couple of weeks to catch it. Highly recommended!

For a Wikipedia article in French on this painting, click here.