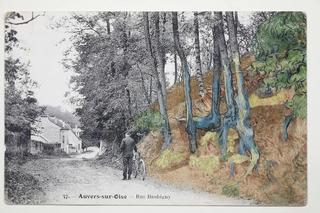 Some of you may have seen in the news that this postcard has led experts to identify the exact location of Vincent van Gogh's unfinished last work. The History Blog's account (with some very high-rez images) is the best I've seen so far. The story is interesting as art history, but it has also set me wondering how an historical postcard might be used in a story.

Playing a variation on Natasha Pulley's exercise for starting a fantasy story, here are four ideas I've come up with in ten minutes:

In another ten minutes, I came up questions about the first two:

If you were going to write a story about a postcard, what would it look like and where would it point you? Remember, it need not be historical. What about an op-art image?