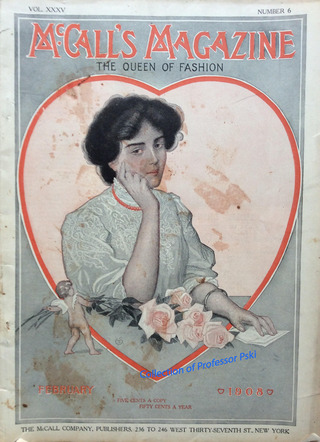 When I ran across this image at Costume History last September, it jumped out at me for three reasons: First, the real Jeanette worked at McCall's Magazine in her later life. Second, my work-in-progress, ANONYMITY, is set in 1908. And third, I'm always on the lookout for pictures I can use for this blog. Naturally, I saved it. So Happy Valentine's Day, everyone!

Now that I've re-opened it, however, I'm also struck by its ambiguity. What is that pensive woman thinking?

Musing on that question could prompt the opening of a story. Or the picture might signal a turning point. It could even illustrate a conclusion in which the main character wonders whether she took the right action after all. For a writing exercise, you could make yourself take into account the heart frame, Cupid, and roses. The most literal translation from image to action would have to involve romantic love. But for a writer, anything goes when it comes to inspiration.

Maybe the woman is:

I throw in that last possibility to point out that thoughts can leap fruitfully from the literal to the barely related, from the wistful to the grippingly dramatic.

Anyway, if you wanted to continue an exercise, you could examine the picture for further clues: What do the woman's hair, her necklace, blouse, bare forearms, and bracelet signify? Some details will need to be retained, others discarded. The stains are actually on the old magazine cover itself, but what if they were on a wall behind her? That might tell you something about you setting. And overall, do you want to retain the mood suggested by the toned-down color scheme (with those stabs of red for the touch of conflict every story needs)? Or do you want to transform it into bright modern colors that glow on a computer screen and go from there?

Your approach can be analytical with a detailed outline, or you may want to sink into a reverie and follow her from here. Either way, there's a crucial question: What does she do next?