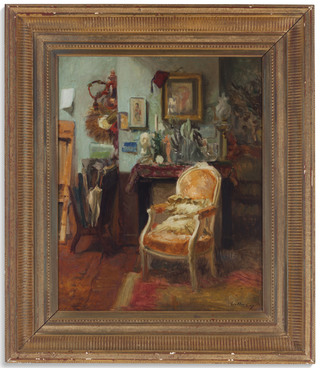 In Where the Light Falls, my character Jeanette sketches and paints what she calls "portraits without people." The latter part of the 19th C saw many artists turn to picturing furnished rooms from which figures are excluded or very much subordinated to representations of light, textures, furniture, wall hangings, ornaments, house plants, etc. These are not genre pictures with implied stories, and yet they do let us catch glimpses of personalities, either the occupants' or the artist's.

Take Walter Gay, for example. Isabel L. Taube and Sarah J. Hall say of his work: "Walter Gay's paintings are not about careful delineation or accurate documentation of a particular room and its contents. Rather, Gay's works—always made on site, never from photographs—are interpretations of these spaces, made distinctive by Gay's evocative use of color and light, and his painterly touch, which creates a sense of life even though there is typically no human presence. The objects and the furnishings themselves become the characters that inhabit Walter Gay's interiors."

To begin a series of posts about Gay's interiors, I have chosen this minor one, auctioned by Christie's in 2018, for two reasons: First, it's his depiction of the corner of an artist's studio, so we see what he considers key clues to at least this artist's identity (it's so modest a studio that I doubt it's his own). The picture is signed, but it has the dashed-off look of a pochade; its relaxed intimacy hints at friendship.

Notice the easel on the far left, the print rack beside it, and the piece of paper (a sketch?) above it pulling away from the wall. The marble bust on the table is another familiar prop; the fez may be a prop, too, though perhaps the artist wears it. Above the bust is a framed picture that might be one of the Japanese prints prized by artists in the period.

This is not a luxurious studio, but it is far from bare bones. In fact, the Louis XV chair is the focal point of the picture. Perhaps it's a model's throne, perhaps a chair for a visitor. In any case, it and the oriental rugs on the floor and table bespeak a certain comfort without implying grand success. For my purposes, it could be the studio of either an amateur lady artist or a woman who makes a moderate living by her brush. Musing on it for atmosphere or detail could certainly aid in writing a story about one.

The second reason for posting this particular image is that it includes the frame, which lets us see how the painting might appear on a wall. In fact, compare it to the picture hanging over the table! Too often we see reproductions surrounded only by the white of a printed page or its equivalent on line. Although this painting is not especially typical of the interiors for which Gay is famous (more of those coming up in future blog posts), for a writer, it offers the beginning of a "portrait without a person."