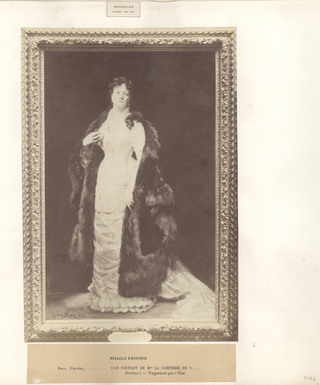 Official photo of Carolus-Duran’s Medal of Honor portrait (1879)
The quality of this photograph of Carolus-Duran’s Portrait de Mme. la Comtesse de V[andal] may seem poor, but I was thrilled to find it among montages of other works bought by the French government at the 1879 Salon. As those of you who do historical or genealogical research know, a digital image of primary materials is almost as exciting as physical objects that can be picked up. (If you have a story of such a find, tell us in a comment below!)

Admittedly, a digital reproduction of a photograph of a painting is tertiary evidence at best, but knowing that the French government took such pains in documenting its purchases demonstrated art’s importance in official policy. Governmental encouragement contributed to the sense of art students like Jeanette that Paris was the best possible place for them to be.

The Portrait of Countess de V— was doubly helpful when I learned that Duran displayed it at his studio during the spring of 1879. It became a focal point for Jeanette and Effie’s arrival there and foreshadowed later chapters. I admit, however, that I had to look at other, color images of portraits by Carolus in order to imagine this one as rich and luxurious, just as we have to work at animating faces from old, faded, and stiffly posed photographs.

For the amazing page of photographs from which this came, click here. You will see how helpful it was in imagining the magnitude of the Salon.