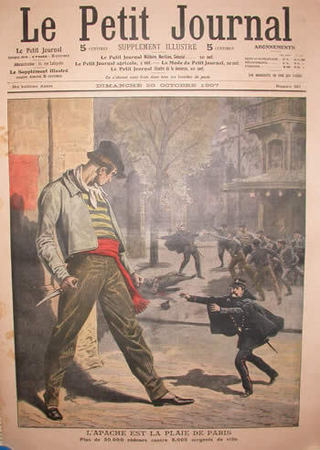 Cover, Le Petit Journal, 20 Octobre 1907
Sometimes interests converge. A recent post on The Gangs of Paris at the Victorian Paris blog sent me investigating the story-telling, tough-guy, tough-gal Danse Apache or Apache Dance (pronounced ah-PAHSH in both French and English), which originated in France and quickly moved to the American stage in 1908. For a more thorough account of the dance’s history (including its various appearances in the movies), click here.

In 1880, women could feel safe at night in the parts of Paris where Jeanette and Effie live; but rougher districts like Belleville (where Effie’s McCall Mission clinic was located) were infested by criminals. By 1900, gangs of so-called Apaches were fighting each other on the streets. Of course, petty thieves and prostitutes had always been found throughout the city wherever crowds gathered. I originally included an incident with a pickpocket in the chapter on the World’s Fair of 1878 to get at this particular current of urban uneasiness, but it was dropped in editing. What remains is Robbie Dolson’s involvement with a gang of thieves, which ultimately forces him to flee to Venice.

In the New York of 1908, you find not only the Salome craze I wrote about earlier, but the Bowery Waltz and Apache Dance—the sexier, seamier side of life manifested in popular entertainment. I’m not sure whether any of this will appear directly in my new novel, but it lends an unexpected tang to Mattie’s world.

For a French blog post on “Les Apaches” in song and film with video clips, click here.

Bonus: For the lyrics to a 1908 Goetz and Hirsch song, “You’ve Got To Do That Salome Dance,” which I’ve just run across, click here.