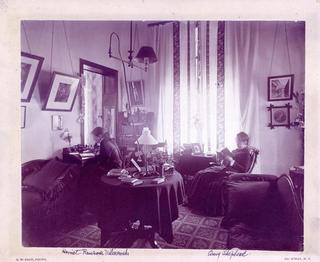 “We had two of the dearest rooms, opening into each other, with four windows in the larger. That was mine—absolutely darling!—embroidered pillows all over the couch, and easy chairs, and a tea-table … and photographs stuck up everywhere … and a border of posters at the top of the wall, and signs which the boys procured for me in town when they came up for the Founder’s Day Reception, and banners—blue, crimson, orange and black, and so forth—and a fish-net draped over the door.” (Schwartz, pp. 61-62)

In visualizing student life at Vassar College, in addition to visiting the campus, I was specially helped by three books:

• Alma Mater: Design and Experience in the Women’s Colleges from Their Nineteenth-Century Beginnings to the 1930s by Helen Lefkowitz Horowitz

• Letters from Old-Time Vassar, Written by A Student in 1869–70 (Poughkeepsie, 1915), which unfortunately is still unavailable on line.

A writer tries not only to narrate what happens in a story but cause the reader to experience atmosphere and emotion. If I had wanted to stress Vassar as a paradise about to be lost, I might have given Jeanette one of the sunny rooms like the one in the photograph. In reality, however, Vassar’s main building also had rooms on the inside of corridors which were windowless and stuffy. These give a better vicarious sense of how Jeanette feels trapped in other people’s power and in her own confused sense of shame and failure. Critics used to decry the “pathetic fallacy” by which authors made the weather suit the emotions of the story or poem; but I say, hey! if it works, use it.