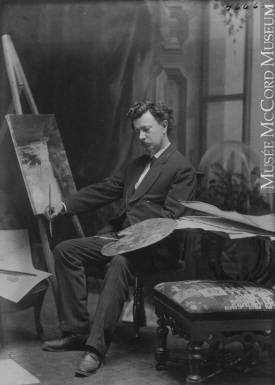 Prof. Henry Van Ingen, Professor of Art (1870)
During my research, it was a delight to discover that there was a popular art teacher at Vassar. If I had known when I was writing that Henry van Ingen was so romantically sensitive in appearance, I suppose I might have given Jeanette a full-scale crush on him. It might have helped prepare for her interest in an older man. Then again, the student author of Letters from Old-Time Vassar, Written by a Student in 1869–70 (Poughkeepsie, 1915) wrote home that “we never think of our teachers as men or Miss Lyman wouldn’t have them here” (p. 70).

A photograph of van Ingen, cigarette in hand as he talks to a girl in the art gallery, captures some of the sly humor I believe the man had. I admit, however, that I pictured him as pudgier and more avuncular.

Playwrights have to see their characters enacted by various actors, and fictional characters are visualized differently by every single reader. Does anyone remember re-imagining a character’s appearance or behavior after learning something either from an external source or internal clues picked up later in a story?