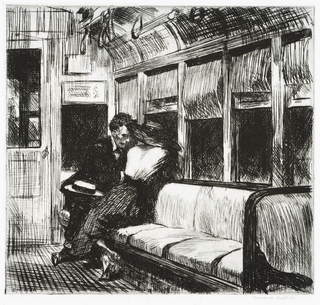 Edward Hopper, Night on the El Train (1918)
This summer, my husband and I went to an exhibition, The Unknown Hopper: Edward Hopper as Illustrator on view at the Norman Rockwell Museum in Stockbridge, Massachusetts, through October 26, 2014. Night on the El Train was not among the work we saw. It is, in fact, one of the freestanding etchings that Edward Hopper made in an effort to support himself beyond magazine illustrationat the start of his career. The Rockwell show, however, demonstrates how much drama and focus he brought to his commercial drawings.

And don’t we all wish it was still the custom to commission illustrations for books and magazine stories! It happens, of course, for children’s picture books and deluxe editions of books some fiction for adults (For two examples, click here and here.)

I came across Night on the El Train, not from the Hopper angle, but when I was looking for early 20th C images of subway car interiors. At one point in ANONYMITY, the idea occurs to Mattie that she and her suffragist friends should surreptitiously put up advertising slogans on subway cars. I know from years of daily rides where such placards would be on Boston’s MBTA—above the windows and behind the hanging straps. It cheered me find it was the same on the New York EL in the early 20th C because then I could imagine the scene with a sense of proportion enlivened by my own sensory experiences.