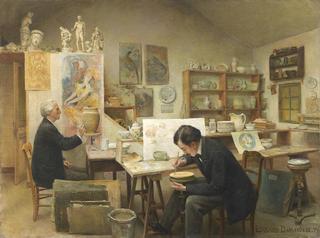 Edouard Dammouse, Decorating Porcelain (1899)
At one point when I thought Jeanette might try to earn money to pay for her art lessons, I considered sending her to a porcelain factory to paint vases as the men in Dammouse’s picture are shown doing. An echo of that theme lingers in the porcelain manufacturer from Limoges who attends the Renicks’ entertainments (and Cincinnati's Rookwood Pottery may lie in Jeanette's future).

For a while, the American-owned Haviland china company in Limoges, France, employed artists, including Dammouse, to decorate their porcelain wares. For some of his work in ceramics, click here.

Charles Haviland married Madeleine Burty, daughter of the critic and collector Philippe Burty. According to The Grove Encyclopedia of Decorative Arts (vol. 1, p. 469), “Burty’s and Bracquemond’s tastes were reflected in the character of the Auteuil studio’s designs, in which the influence of Japanese art and Impressionism is evident.”

A little lagniappe: I ran across an 18th C Chinese drawing of a porcelain factory. In both cases, commercially produced porcelain is being decorated by hand. There is no real connection, but it’s always worth making serendipitous little mental links. You never know where they’ll lead some day.