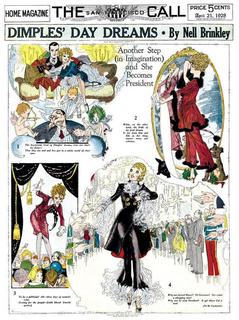 What a difference a decade can make! Contrast Nell Brinkley's Dimples in 1928, daydreaming of becoming President, to yesterday's stalwart defender of Labor. (And, Kamala Harris, get a load of the pantsuit!) Yep, my copy of Trina Robbins's The Flapper Queens arrived, and it's terrific. I'm tickled to learn that Brinkley came to New York in 1907, so sure enough I can add a break-out female cartoonist to the publishing world my Mattie inhabits. Mostly, though, I'm getting a kick out of the visual energy and cheekiness of Brinkley's art work.

In an earlier article on Brinkley that includes a gallery of images, Robbins wrote: "In 1907, at the tender age of twenty-two, Nell Brinkley came to New York to draw for the Hearst syndicate.  Within a year, she had become a household name. Flo Ziegfeld dressed his dancers as 'Brinkley Girls,' in the Ziegfeld Follies.  Three popular songs were written about her. Women, aspiring to the masses of curly hair with which Nell adorned her creations, could buy Nell Brinkley Hair Curlers for ten cents a card.  Young girls cut out and saved her drawings, copied them, colored them, and pasted them in scrapbooks.  Her beautiful Brinkley Girls took over from the Gibson Girls."

D. B. Dowd's Illustration History post on Brinkley has more images, and I learned there that in 1908 Brinkley covered the infamous Thaw murder trial. "The proceedings in question concerned the killing of architect Stanford White by Henry K. Thaw–over the honor of Thaw's wife, the beautiful Evelyn Nesbitt, cultural icon and early sex symbol. Nesbitt had worked as a model for the biggest artists of the day, and was reputed to be the model for Charles Dana Gibson's "Gibson Girl," the first it girl of a long line." Gibson Girls? Make way for the Brinkleys!