And The Ocean Was Our Sky 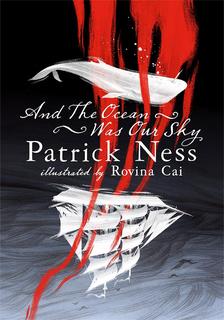 "Call me Bathsheba." Thus opens Patrick Ness's novel, The Ocean Was Our Sky. (I giggled, remembering the opening to James Thurber's The Wonderful O: "Call me Littlejack,' he roared. And the taverners called him Littlejack.") An obsessed captain hunting a villainous Toby Wick? Surely this must be a joke, a parody of Moby Dick. It works by inversion: ocean for sky, whales who hunt whalers. A female narrator, Bathsheba, against Melville's Ishmael. But the book isn't funny: it's heartbreaking and weird, and Rovina Cai's illustrations are as important as the text.

I haven't read anything else of Ness's, but I have loved Cai's artwork ever since I saw her masked ravens at Lines and Colors in September 2015. And, as readers of this blog know, I'm all in favor of illustrations in books, both those that mirror details in a story exactly and those that illuminate it by enlarging its dimensions. In the case of Ocean Was Our Sky, the text could stand without the pictures and make sense; it could conceivably be illustrated later by somebody else, whereas the pictures without the text would mesmerize but baffle. Yet the book contains so many wordless pages that there is unquestionably a synergism at work, whether it was planned from the beginning or emerged as production advanced. For sample pages, check out Rovina Cai's post on And The Ocean Was Our Sky.