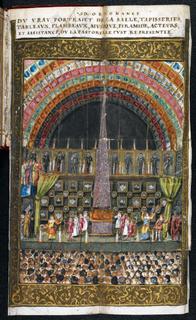 Blog post alert: I had a subplot about a theatrical company in the novella I'm working on now. A reader of an early partial draft said, "I like your actors, but I don't see where you are going with this." Neither did I really, so I removed most of it. Am ever I tempted to reinstate it, though, after seeing this image in the British Library's post, The Show Must Go On!

The picture is a fold-out watercolor depicting Act IV, sc. ii, in the performance of Pastorelle, a play by Loÿs Papon, in the Salle de la Diana in Montbrison in 1588. Harley 4325 contains not only this watercolor fold-out, but an autograph copy of the text and the author's personal account of the occasion. He gives such details as how the lighting was achieved (90 wax torches) and illustrates the actors' costumes.

My imagination is stimulated as much by the concrete details of settings as it is by plot. By dwelling on what would result from certain constraints and conditions, I discover action. Who knows, maybe I'll see a way to give my actors a bigger part again, or even a story of their own. Meanwhile, if you are interested in Renaissance drama, don't miss The show must go on! Putting on a play in the 16th century.