Nine steps to a ghost story 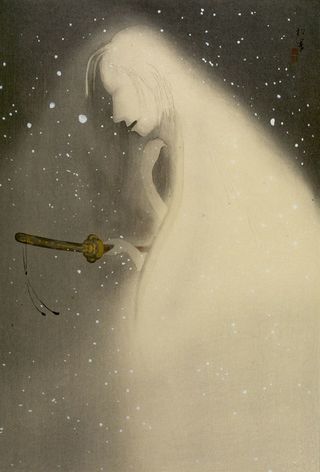 A look at Christmas ghost stories this year somehow sent me to Tales of Moonlight and Rain by the 18th C Japanese master, Ueda Akinari. In his introduction, the translator, Anthony H. Chambers draws on an analysis of Chinese stories about anomalies—the weird, the uncanny, the ghostly—to derive a typical structure for Akinari's tales (see pp. 22–24). Following it step by step can turn into a dandy writing exercise.

I've changed Chambers' scholarly analysis into more of a how-to:

1. Begin the story in a very realistic time and place.
2. Introduce your main character within a specific occasion.
3. Set in motion an action that seems likely to lead to an ordinary, predictable ending.
4. Supply hints that one of the above is not so normal after all.
5. Cross a border: dusk, the Solstice, midnight, a ruin, an abandoned house, fog.
6. Throw a shock at the protagonist.
7. Dramatize the character's reaction. (You can repeat steps 6 and 7 if desired; but if so, two more twists are shapelier than one, and too many are, well, overkill.)
8. Conclude the action. The outcome can be happy, mysterious, horrifying, vengeful.
9. Optional: Follow up with an account of how the story affected the main character or larger society (or the ghosts).

What I suggest is that you give yourself an hour. Jot down notes or a sentence for each step. Don't worry about necessary transitions or style. Don't worry about clichés or stealing ideas. You are not writing a story, just generating an outline.

And, yes, I made myself do it after letting it rattle around in my head for an afternoon. The hook that came to mind was a story that my husband's grandmother once told me about the time she saw a ghost, a young woman sitting on a fence (nothing happened; that's all there was to it; but it stuck in my mind). I had also begun reading In Kiltumper: A Year in an Irish  Garden by Niall Williams and Christine Breen. Williams tells about the Breen family's custom of rushing out the back door at the stroke of midnight on New Year's Eve to run around the house and come in the front door before the last stroke (out with the old, in with the new). Those two ideas came together. Time to try out the writing exercise.

Here's what I came up with in half an hour.

1. Narrator remembers first visit to husband's family for New Year. In-laws, outlaws. Indoors, outdoors. The shy lady sits on the porch.
2. This year, first one in a long time. Running late. Changes?
3. Joins in setting up the invariable evening meal and ritual
4. Asks whose was the gray horse? "You saw a gray mare?" "Gray mare, gramarye, Gran'marie, avert!"
5. Grandfather clock strikes midnight. Rush out back door in a line
6, Gray mare blocks the way. Confusion, bustle. Scream, "We have to get back in!" The shy lady slips in and narrator recognizes her: the grandmother young
7. Narrator takes bridle on command. "Marrying in's not the same thing as blood." Gray mare kicks narrator.
8. Door slams at stroke of twelve, leaving narrator on the steps.
9. It's cold on the porch, but I don't feel it, not the cold, only the desire for vengeance.

I may try to write it up. Steps will change, stuff will be added, it may not work. The point of the exercise is not so much to achieve a first-rate work of fiction as to show yourself you can get from beginning to end if you let yourself go and just do it.

It might even work as a parlor game. The first person takes step 1, the next person step 2, and so on. (Will it go around clockwise or widdershins? Hey, is this the start of a new story? "Back in the day before the pandemic, when we used to gather on Christmas Eve …")

A note on the image: Uemura Shoen (1875-1949) was a rarely seen shin hanga female artist. In 1948, she became the first Japanese woman to receive the "Order of Cultural Merit." This print "Female Ghost" is from her series, "Complete works of Chikamatsu."

Brilliant! I loved this!