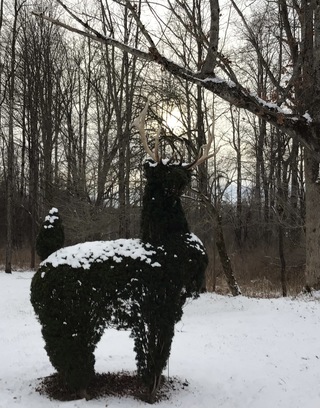 This topiary llama has always made me smile, but, whoa! The antlers transform it into something spookily magic, especially when the winter sun is caught in a circle of their prongs and tree branches. I had to stop the car and take an amateur photograph. Such poignance here in the Anthropocene to be carried into the deep resonances of myth from an earlier age!

The myths we live by evolved in the Holocene, the period of relatively stable climate since the last Ice Age. Antlered animals and zoomorphic forms are depicted from the Paleolithic on, and Ovid's Metamorphoses are just one expression of the fluidity of life. Another might be the mysterious, ritual music and dance, like performances of the Abbots Bromely Horn Dance. They remind us that we should think of ourselves as immersed in nature and the great cycles of time.

In The Irrational Season, Madeleine L'Engle reminds us also that in the Christian liturgical year, Advent is not about shopping and baking and candy canes. Instead, "these weeks leading up to Christmas, this dark beginning of our new year, is also traditionally the time of thinking of the last things, of the 'eschaton,' the end" (p. 2). You don't have to feel a need for the Second Coming to see that such contemplation is all too appropriate during a pandemic at the start of the Anthropocene. Only later generations will know what myths will emerge to help humans make sense of the scary new world we have made for ourselves.

Luckily, there are still moments when Now! is so compelling, so beautiful, that mystery stops you in your tracks and you don't have to explain anything, only respond.