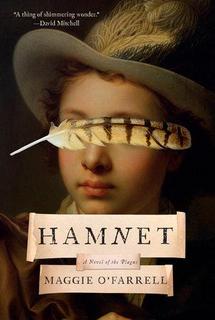 As promised, now that I have finished reading Maggie O'Farrell's Hamnet, here are some reactions. First three quickies: Is it a convincing exercise in historical imagination? No. Is it convincing as fiction? Yes. Could it stand on its own as a story for a reader who knew nothing about William Shakespeare and Anne Hathaway? Hmm.

Ever since William Shakespeare wrote his history plays, authors have written about real people with varying degrees of historical accuracy. Shakespeare's own Richard III is a devilishly clever play even if it amounts to slander (see The Daughter of Time). Tom Stoppard's script for Shakespeare in Love is a gorgeous, improbable lark. Hilary Mantel has given us a Cromwell worth having despite a lack of documentary evidence for his early life. Which leads me to Anne Hathaway—or Agnes, as O'Farrell prefers to call her. Next to nothing is known about Shakespeare's wife except that she was eight years older than her husband, stayed home in Stratford while he was in London, and was left the second-best bed in his will. Also, of course, that of their three children, the twin named Hamnet died. Given O'Farrell's ambitions, therefore, it is fair to ask whether she succeeds in giving the real Anne/Agnes a believable voice and personality. My answer is, no, the historical woman inevitably remains a blank.

O'Farrell would probably agree. For an interesting interview in which she speaks about what she set out to do, click here.

Nevertheless, a more important question to my mind as a novelist is whether O'Farrell succeeded in creating a satisfying fictional character. Her Agnes is strong-minded. She's an herbalist. She has second sight. She flies a hunting kestrel. These traits certainly appeal to a modern reading audience's taste (H is for Hawk, I'm looking at you), though the more fastidious may disdain them as pushing too many marketing buttons. To be fair, the kestrel works mostly as an early emblem for Agnes's wildness and then disappears. And the herbs give her a job to do besides housework, mothering, and submitting to a domineering mother-in-law. The second sight? It may be meant to give the story mythic dimensions. If so, it only halfway worked for me on a first reading.

Nevertheless, O'Farrell is a confident, observant writer and a sound prose stylist. She gives Agnes an observant eye which allows her to include telling details naturally. Her characters and incidents are vivid. I love the sister-brother pairs throughout the book: the twins Judith and Hamnet most centrally, Agnes and the sturdily loyal Bartholomew, the playwright and Eliza (Joan in real life). The echoes of twins and doubles from Twelfth Night and other Shakespearean plays work well. And O'Farrell creates family dynamics that provide tension and refractive variations on themes. It's a tribute to her skill that she builds suspense about exactly what will happen to the boy Hamnet even if you already know. And then, by golly, she pulls off a denouement that is far deeper and sadder and more profoundly insightful than I, for one, could see coming. It justifies any feeling O'Farrell had that she simply must write this book; and it should earn her every reader's gratitude.